According to the Forbes Global 2000 list and formula, Berkshire Hathaway is the third largest public company in the world. By revenue, it is the 9th largest conglomerate. It is also the largest financial service company by revenue.

Listed on the New York Stock Exchange, it is famous for having the most expensive share price in history. At the time of writing, a Class A share in Berkshire Hathaway Inc. cost 312,850 USD. The company chairman Warren Buffett has declared that there will not be a stock split, since he believes that a high share price attracts investors that are focused on long-term profits rather than short-term price fluctuations.

Warren Buffet began investing in Berkshire Hathaway in the early 1960s and soon emerged as a company leader, a position he has kept since then. Today, he serves as both chairman and chief executive, with Omaha-born Charlie Munger a vice chairman.

Berkshire Hathaway’s corporate offices in Omaha are located in the Kiewit Tower on 3555 Farnam Street, at the corner of S 36th Street. The building is named after Peter Kiewit Sons’ (The Keiwit Corporation), a construction company which is also headquartered in the building. 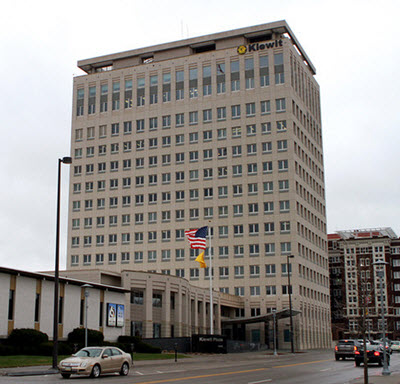 Berkshire Hathway was formed in 1955, when Berkshire Fine Spinning Associates merged with the Hathaway Manufacturing Company.

After the merger, Berkshire Hathaway had 15 plants and over 12,000 plant workers. Before the end of the 1950s, seven of the plants had been closed and the workers laid off.

In the early 1960s, investor Warren Buffett noticed that the stock price for Berkshire Hathaway behaved in a predictable manner after each closing of a mill, and in 1962 he began buying stock in the company. Eventually, he realized that the U.S. textile business was in a decline, and when the company president Seabury Stanton made him an oral tender offer of $11 1⁄2 per share for the company to buy back the shares, Buffett accepted. Things turned sour a few weeks later when Buffet received the tender offer in writing, because now the price had been lowered to $11 3⁄8. This angered Buffett, who refused to sell at the lower price and instead started buying up more stock in the company, with the intention of gaining enough control to fire Stanton. Buffett eventually achieved this goal, but at the price of becoming the majority owner of a company in decline.

In 1967, Buffett decided to expand the company into the insurance industry and other investments, to make it less reliant on revenue from the struggling U.S. textile industry. The company’s first foray into the insurance field was the purchase of National Indemnity Company, an insurance company founded in Omaha in 1940 by Jack Debney Ringwalt. Today, it is Berkshire Hathaway’s oldest operating subsidiary.

In 1985, Berkshire Hathaway’s last textile operations were shut down.

In 2010, Buffett said that purchasing Berkshire Hathaway was the largest investment mistake he ever made. He bought a controlling share in the company to get back at Stanton, and it would have been more profitable to invest the money directly in the insurance industry instead.